“I don’t know why it should be a crack thing to be a brewer, but it is indisputable that while you cannot possibly be genteel and bake, you may be as genteel as never was and brew.” Charles Dickens, Great Expectations.

Did you know that my husband brews his own beer? Yessir. And he is damn good at it. Must be something about having been a chemistry major at Harvard College and working as a partner at a law firm. He possesses that crucial combination of the knowledge and the work ethic to make a good batch – because believe me it is too easy to screw it up. One false move and you contaminate the beer and end up with something that tastes like metal or bananas. Not good.

When we moved to London from the US last July, we sold our house and with it our spacious and attractive backyard and finished basement, both of which were perfect for his home brewing gig.

Bill threatened to sell off his gear or, even sadder, leave it to fester in storage. I put my foot down. “No way,” I said. You have to keep this hobby — this is not something that you give up. We will find a house with a garden and you will bring your equipment and you will brew. I mean, this was more than a hobby. He liked it enough to upgrade equipment at an alarming rate (and call or email excitedly to check to see if such had arrived at the house while he was at work) and to grow and harvest his own hops at his parents’ house on Cape Cod.

If you brew it they will come.

So he did. Admittedly, he had a few start-up issues. A lot is different here in England. The fittings for the hoses are not the same, among other things. So Bill had to improvise. At times he became very frustrated and used foul language. But if you don’t struggle you don’t learn, I reminded him, and so he worked it out.

He ended up having to order a number of fittings from — get this — a Scottish avionics catalogue. There was a lot of nonsense about male and female ends and tapered threads and what-not. He also had to figure out how and where to order “beer gas” in order to carbonate a batch once transferred to a keg. They don’t call it CO2 here even though that is precisely what it is.

On the upside, the tap water in London tastes fabulous and doesn’t need to be filtered. Of course, despite the fact that it has rained every bloomin’ day for weeks, there is currently a “drought” and a “hose-pipe ban,” which basically means that you cannot use a hose in your yard. Even though I am about to line up the animals two-by-two, for crying out loud.

I knew that things were looking up when Bill went to John Lewis, a well-known British department store, and selected a small fridge to house his keg and CO2 canister (oh, sorry, his “beer gas”).

The first batch was a triumph. Our English gardener tried it and proclaimed he would “pay for the stuff.” In fact, there hasn’t been a bad batch yet.

But recently Bill decided to make a Belgian Saison, a summer farmhouse ale that demanded to be fermented at a high temperature in order to activate the special yeast contained therein. But where oh where to put this stuff?  What was the hottest room in the house?

Well guess what, it is the guest bathroom, which I have taken over because I like to take baths rather than showers ever since my surgery and our master bath has only a shower. The guest bathroom, my private haven where I luxuriate in the tub with rose bath oil while listening to genius salsa mixes on my iPad and contemplate the meaning of life. My haven that happens to hover at around 80 degrees (Farenheit, duh) because it is also home to the hot water heater.

Oh sure. That carboy (a huge, ribbed, glass container full of fermenting beer) was in there for weeks, belching away while lovingly wrapped in a men’s extra-large fleece and babysat by a thermometer, which Bill checked morning (noon if it was the weekend) and night. And then he decided to bottle it rather than keg it so now the bottles are in there, fermenting some more. 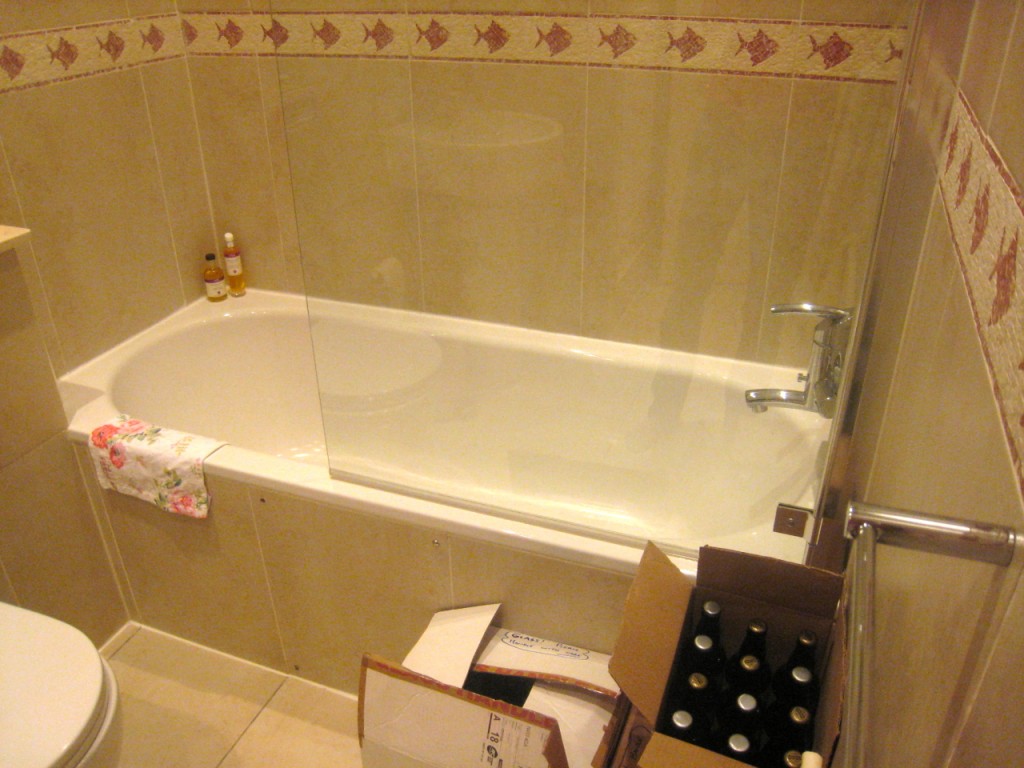 Really though, I cannot complain. The beer is not in my way and I enjoy looking over at it from the tub and thinking, “this is something special that my husband has made and makes him happy.” And when it is ready I will get to sample it.

We just have to come up with a better name than Scheisshaus brew, don’t you think?