My New Year’s resolution is to try to give less of a shit, generally, which is bound to fail. But I’m really going to give it the college try. Well, selectively. How about this: I will give less of a shit about shit that I deem is less worthy than other shit.

This has been a strange six months for me. I alluded to some of it in Reentry: Part One (no that is NOT a porn) which, sadly, is the last post I wrote and is dated October of last year. I could now go on and on about how I never write anymore, enumerate the various mundane pressures in my life that I feel have kept me from being able to write and have left me feeling inadequate and be all apologetic but as part of my New Year’s resolution, I have decided not to give a shit, right? Besides, I am now writing and that’s what matters.

I remind you that this started as a blog about, among other things, dealing with breast cancer. Incidentally it turned into a blog about whatever, generally, was on my mind and I felt like writing about at the time. It has evolved into a series of posts that are maybe more about the latter and less about dealing with cancer. However, once in a while I feel it is necessary to stir that shit up again. Just in case you thought (hoped?) I had forgotten all about it.

January, they say, is characteristically a difficult month to endure. The pine-scented jingle jangle of the holidays is over, evidenced by discarded carcasses with browning needles here and there. The days are colder and shorter and the bills are higher. It is a time to reflect on what we accomplished and failed to accomplish and we are all suddenly supposed to be better, eat healthier, drink less, exercise more, be more like Tom and Gisele.

For me, it has the added fun-filled benefit of being the anniversary of my cancer diagnosis. January 3, I believe, is the day I received a call (and an e-mail, actually) that “yes there is a cancer… but totally ‘routine’ and ‘treatable.'”

There is “a” cancer. Is this supposed to be better than telling someone, “you have cancer?” It sounds like some politician’s passive announcement after having just ordered fighter jets to drop bombs on the enemy. “[Insert middle eastern location] has been bombed in an airstrike. Civilian casualties were sustained.”

This year marked the fourth anniversary of my diagnosis. You might be thinking: “well, that’s cause for celebration! Another year and you will reach that magical five-year mark.” First of all, I think the five year mark is properly acknowledged on the anniversary of the termination of treatment. And let’s face that it is somewhat arbitrary. Second, forgive me if I am not all excited about the reminder that at age 39, I discovered one night in the shower a lump in my breast, underwent a number of stress-inducing and physically uncomfortable tests, and found out that in fact, yes, against all odds I had a life-threatening illness that would affect the quality of my life for the next who-knows-how-long. Do I sound bitter? Sorry. I’m not. Just keeping it real. It was a sucky, terrifying experience.

One of the hardest things about it, which I endured in waves rather than as a constant, was the feeling that I was damaged goods. The feeling when standing on the street and observing passersby that I was being left behind while everyone went on with their marvelous daily lives, clinking glasses, traveling to exotic locales, being carefree, running up hills in Primrose Hill Park. Of course a lot of that is bullshit since everyone has something they have to deal with — some a lot more serious and unpleasant than my lot. If life were as pretty as everyone pretends it is on Facebook and Instagram the world would be a different place. But if all it takes is a few minutes of looking at social media (come on you know you felt like pretty girl’s fat ugly friend after you looked at your skinny rich friend’s latest [photoshopped?] vacation pics) to make you feel bad about yourself, is it any wonder that, standing outside, pale and bald (albeit clad in a headscarf and slathered with makeup to disguise such things), I felt a little bit like a loser?

There was something about being in that group that made me feel decidedly uncool, like a misfit, a reject, someone with an issue “normal” people politely inquire about but don’t really understand. What’s more, they generally don’t want to be bothered with it because it is uncomfortable, undesirable, “unfun” and just “un.”

As I said, I didn’t always feel that way. And I don’t feel that way any longer. Maybe other people in that situation never felt that way at all. I think it is my nature to want to be included, to join in the party. So that likely predisposed me to experiencing what I did. That and being teased a lot as a kid in grammar school. Fuck you, all of you zeroes who gave me a hard time back in the day. I forgive you. And in any event I don’t give a shit — my NYR, remember?

But anyhow, I will continue with the point of this whole thing, which is really about feeling better about myself.

As my plastic surgeon friend Beth told me years ago on the eve of my treatment, once you are done with all the draconian life-saving nonsense, you are left with your cosmetic appearance. And thanks to the radiation that I was never supposed to need on my right side following my bilateral mastectomy/reconstruction and chemo, my right boob (remember Marjorie?) ended up healing a little less than ideally. I must interject that implants and radiation do NOT mix well and there is about a 50% failure rate (meaning complete failure) so all in all my result was pretty damn good. I don’t want nobody misunderstanding and failing to be impressed by my rockstar surgeon in London. Because he is a badass, though understated because he is so polite and English and wears nice grey flannel suits and shit.

Anyhow, my right “boob” a/k/a Marjorie kind of looked like Rocky Balboa after a few too many rounds, the main offender being a scar that was tethered and caused a significant dent in the middle. For years now I have been covering that bitch up with good, lightly padded Chantelle bras and those stupid lulu lemon oval pads that come in their wouldn’t-fit-anyone-with-normal-tits-that-I could-never-wear-before-anyway exercise tops. Think ultra-thin chicken fillet sitting on top of that dent to smooth it out.

Without the chick fillet, the dent was clearly visible, particularly from a three-quarter angle. Not ideal.

After I moved back to the US I decided to pursue a more permanent remedy and went to see a couple of plastic surgeons. They decided that what I needed was a scar revision, in which they would open the original incision, remove scar tissue, release any tethering to the muscle beneath and sew Marjorie back up with thicker, better skin a couple milimeters on either side of the original scar.

This morning I just had my follow-up post-op appointment. Marjorie is looking pretty good. Much better, in fact. She is not allowed to carry more than 5 lbs for another two weeks, and she can’t spin or do boot camp class with the other suburban mommies. But if all goes to plan and Marjorie behaves, it will be so worth it.

I told a couple of ladies at my younger daughter’s new school about the procedure and one said, aptly, “that’s good — it won’t be a constant reminder of what happened.” I thought about it and said, “well, I don’t really give a shit about that — there will always be a reminder… I just want to be hot.”

If all goes well, terrific. If it doesn’t, well, then, I will dust off the chicken fillets and try not to give too much of a shit about that either. 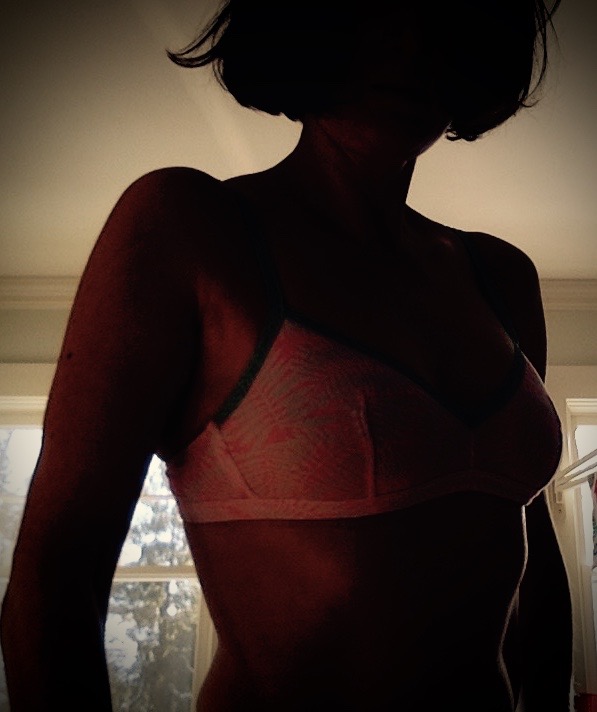