Wow. Here I am. And this is it. Last chemo tomorrow morning. I have to say the whole thing has gone so fast it makes my head spin. I’m really not sure what to be thinking right now. 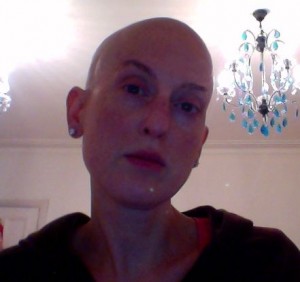 Here is a picture of what I look like now with absolutely not a trace of make-up on. It is not particularly pretty. Losing the eyebrows and eyelashes isn’t a good look. But I think I may soon do a post on how to glamify when one looks like this. So here it is. At least I have some colour in my cheeks.

I spent my day shopping for an appropriate farewell to chemo (read: final fuck you to any random cancer cells floating around) outfit. I have a couple of contenders and will make the final determination tomorrow morning. But I think I know what I’m going with. One day I have to do a post on hi/lo fashion. You know, high being the expensive stuff and low being the cheaper stuff. I like to mix and match. Good shoes, but cheap t-shirt, and so forth.

Tomorrow we are definitely going for low. British low in honour of the recent Diamond Jubilee celebrating Her Majesty’s sixty years on the throne. I bought everything at Top Shop. If you don’t know what Top Shop is, it’s sort of like the British H&M. If you don’t know what H&M is, you are probably one of my parents or similarly aged relatives. This is okay. You can always Google it.

Maybe I should just go naked and paint my body with a big Union Jack. I mean everything in this place has been “Jubileed.” There was a chick on the tube this afternoon with pink, press-on Union Jack finger nails. But I have to admit I kind of liked them. She only did the thumb and ring fingers, so it was understated tacky. Just my thing. I bet you could get a Union Jack merkin in Soho. If you still don’t know what a merkin is you have to read Vag Toupee immediately.

Back to the white elephant in the room.

So, what is the meaning of last chemo? After tomorrow’s potion wears off, no more poison coursing through my veins, which is good and bad. Good because the side effects will eventually start to wear off and I will start feeling normal again. Bad because then it is up to my body to repair any bad cells. Although I will be on Tamoxifen (endocrine therapy) for five years starting in a couple of weeks, so my body will still have some help fighting this SOB, just in case.

I had chemotherapy because I needed it. So it is good that I did it. But damn, are there things that I will not miss. Let me list some of them for you here, so that I can simultaneously remind myself and share with you what they are:

Thrush (in mouth) going on about four times now, queasiness, taste bud changes, metallic taste in mouth, skin rashes, dry skin, breaking out, bloody nose, runny nose, bloody other places that I won’t go into detail about, pink urine from the red doxorubicin, loss of hair on head, and now, finally, eyebrows and eyelashes (starting to go I’m afraid), night sweats, shingles outbreak on back of head, pain under finger nails, brown spots under finger nails, pain in bones, pain in joints, fatigue, steroids (fast heartbeat, trouble sleeping, “irascible” behaviour according to close relatives), constipation, yucky bitter-tasting anti-nausea meds, being on so many meds generally, skin tenderness (so bad at times it hurt to be touched), discolouration (hyper-pigmentation) of skin, particularly knuckles, old-looking, dry, peeling and wizened hands, and the portacath that is now living under my skin (gross).

Yeah, WHATEVER. Is that all you can throw at me? That shit is child’s play. I went to Paris last weekend for crying out loud. And walked all over creation. And stayed out late. And drank champagne. And ate escargots. So I can handle all of those stupid side effects and other crap if it means I killed it. I bet there isn’t even anything left to kill in there. There probably hasn’t been for weeks now, if there ever was. So there. Take THAT, you microscopic pieces of you-know-what.

Excuse me. Now that that’s done, here are the things that I liked about chemo: the superb and attentive staff at the LOC chemo suite, having visitors during treatments, having reflexology during treatments, cheering up other patients, white leather adjustable Dr. Evil chairs, my chemo outfits and umm, let’s see, oh yeah, NUKING cancer. Chemo may be draconian and there may be new drugs coming out soon that target cancer cells and meanwhile do not harm good cells, but for now this is it and it is effective. So.

Now I have to read a chapter or two of the second book in the Hunger Games series and then get some sleep. Tomorrow is my farewell to chemo party.

Do you think anyone will bring a cupcake with the number eight on it?

10 thoughts on “‘Twas the Night Before (Last) Chemo”