It’s sort of difficult running into people who haven’t seen me since I had long wavy hair and didn’t know I had cancer. When they recognise me (and it registers) I feel somewhat apologetic at the shock and horror they experience.

Then the usual happens. After the initial surprise wears off, they ask when I found out and how I am doing and tell me I look great, which is true, of course, so I smile and thank them. Ha ha. 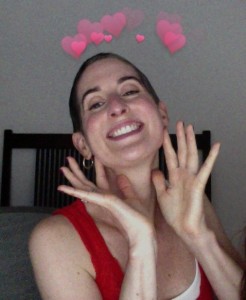 Once in a while I get a slightly “different” response. The latest happened just the other day, in fact. I ran into a lady I hadn’t seen (well I had seen her but from afar and she hadn’t really seen me) since last fall. Let’s call her LB for short.

After LB and I exchanged pleasantries, she touched the side of my head and said “I wanted to ask you about this haircut!” Um, yeah. Je suis très chic, dontcha know. I explained that the haircut was not my choice and then the shock and awe part happened. It happened and happened and kept on happening and there were gestures and hands clapped over the mouth and lots of “Jesuses” and even a few “fucks” thrown in for good measure. And grunts and groans. And a “but you were so healthy!” It really went on for a while. It was like watching a broken fountain: the water just came out in fits and spurts and kind of all over the place. I just stood there waiting for it to be over.

She threw in a “we thought you were making a political statement!” I considered this. Hmm. This might have been a keen assumption had I also been sporting an eyebrow piercing or a fresh tat or had I been (at that moment) worshiping the devil, cultivating armpit braids or ripping up a picture of the Pope or something of that nature. But there I was, sitting cross-legged in my premium denim (no I won’t name names cuz then you will just have to run out and buy the same jeans) and a purple J Crew merino wool sweater (don’t care if you buy that) and flats. And I was wearing my diamond studs and mascara and shit. Let’s just say I wasn’t exactly channeling Sinead or a Nazi skinhead.

“Nope,” I said. Not a political statement. The malfunctioning fountain was interrupted by the speaker to whom we were supposed to be listening and as we turned our attention that way a warm wave of relief enveloped me. Saved at last. (Although during the speaker’s comments there were a few sputters and snorts, but they didn’t really rise to the level of what I consider to be verbal communication.)

Naturally LB wasn’t done with me. The questions started again the instant the speaker had finished. The pièce de résistance was when she looked at me and exclaimed “but I don’t understand; you have eyebrows and eyelashes!” “Yes,” I said. “They grew back. I didn’t have them six weeks ago.”

“Oh my God!” She cried. “What did you do? (imagine the crescendo building….) You must have looked like… a FREAK!”

What did I do? Well I wore make-up. And then it was over and the shit grew back. And now here I am, for crying out loud. All freaky five feet nine (okay so maybe eight and a half) inches of me.

I’ve looked back at pictures of myself without eyebrows and eyelashes and hair and I do in fact look pretty weird without make-up on. But that is sort of besides the point, isn’t it, people?

Two excellent thoughts occurred to me during this episode:

No. 1: Thank God I didn’t run into LB while I had no eyebrows or eyelashes, the sight of which might have led to a water show that far outsputtered the one I witnessed.

Luckily I have a sense of humour and am comfortable with my physical appearance. But here’s a little tip in case you aren’t sure: if you see someone who looks odd because they are bald and/or pale and/or have no eyelashes or eyebrows or you find out that at one time they didn’t have them because they had CANCER and had to have CHEMOTHERAPY for fuck’s sake, don’t say they look, or must have looked, like a freak.

Only I am allowed to say that. It’s like people being allowed to make ethnic jokes about their own ethnicity.

At the end of the day I am really proud of my self-restraint. I could say a whole lot of other absolutely hilarious shit about LB now and make some truly witty ironic comments but because I am classy I don’t want to identify her.

Now if you’ll excuse me it’s Friday night and I have to get my freak on.

3 thoughts on “My Latest WTF Moment”